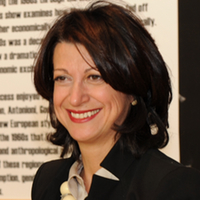 Founder and Director of The Fabric of Cultures Project

Eugenia Paulicelli is Professor of Italian, Comparative Literature, Women’s Studies at Queens College and the CUNY Graduate Center. At The Graduate Center, she is appointed faculty in the programs of Comparative Literature, The Italian Specialization, Women’s Studies, and The Master of Arts in Liberal Studies, where the concentration in Fashion Studies she created is housed.

She was born in Canosa in the region of Puglia in Italy. She studied in Italy at the University “Aldo Moro”, Bari and in the US where she completed her PhD in Italian with a minor in French at the University of Wisconsin, Madison (1991). In Italy, she specialized in English Literature, semiotics, and feminist theory. In the US, during graduate school she furthered her research interest in the relationship between word and image, art and literature, and critical theory, from which her approach to fashion has drawn. Since then, she has worked on establishing the study of fashion at CUNY with an academic and inter-disciplinary approach in Italian and Women’s Studies, and on collaboration with colleagues in the arts and humanities, social sciences, digital humanities.

Her research spans the history and theory of fashion, the relationship between fashion, film, literature and other media, the politics of gender and race, women’s history, the role of narrative in nation building. She has curated several exhibitions as part of The Fabric of Cultures Project and has authored and has co-curated an academic book of the same title and two catalogues.

As author, editor and co-editor, she has written 13 books on early modern Italian writers such as Baldassarre Castiglione, Arcangela Tarabotti, Cesare Vecellio, Giacomo Franco and their costume books, and modernist writers such as the feminist seamstress and writer Rosa Genoni, futurist artists and fashion, Natalia Ginzburg, Clara Sereni and Italo Calvino, on Italian filmmakers such as Nino Oxilia, Michelangelo Antonioni and Federico Fellini. She has also written on Salvatore Ferragamo and cinema (in Shoe-Reels. The History and Philosophy of Footwear in Film (2020) and on “Made in Italy and cultural translation: From Gucci to Dapper Dan and Back” (2021).

As an Italianist, she has created several projects that innovate the Italian curriculum in higher education and connect language and culture through the introduction of art, fashion and material culture. See the pedagogy page on the Fabric of Cultures site: http://thefabricofcultures.com/pedagogy/italian_language/

She has received international recognition for her work such as The Benjamin Meaker Visiting Professorship, University of Bristol, 2013; the “2019 Italian Ambassador of Design,” Johannesburg, South Africa, and for her contribution to the field of Fashion Studies, The Italian Cultural Heritage Committee of New York (2017). She has lectured in the US, Europe, China and South Africa.

She is also the founder of the CUNY Italian Film Festival IC-CUNY: .

More information can be found at her personal site: eugeniapaulicelli.com