Fashion stands on the shoulders of the environment. Slowly yet surely, the environment is crumbling under the pressure of the industry, especially at the hands of fast fashion. Brands like Zara, ASOS, H&M, and many more, cater to a general public with affordable and trendy clothing, but what many consumers don’t see is that their purchases contribute to the destruction of the planet. The only way fashion and the environment see eye to eye is through the vision of upcoming designers.

One such Italian designer is Silvia Giovanardi, who uses her fashion brand to make the case 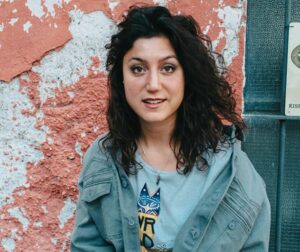 for sustainability and encourage dialogue with an eco-friendly fashion industry. Winner of the Green Carpet award in 2018, given to designers who are environmentally conscious, Silvia first worked as the Manager of the Menswear Artistic Office in the famous Italian Fashion house Etro before creating her own brand. It was here that she was reminded of the respect she had for Mother Nature during her childhood. And by witnessing fashion and the pollutants it produces firsthand, Silvia was motivated to found her own project centered on a fashion that protects her beloved earth.

With her own brand, Silvia Giovanardi’s aim was to showcase her designs as illustrations of a lifestyle where fashion and environmental life are harmoniously connected. In her own words: “[My] Philosophy promotes the return to the Original Meaning of Fashion… that re-discovers, through art, the beauty of nature. Love is the mantra.” There is a sense of organic purity and respect in Silvia’s work. She consciously uses natural dyes, ecological fibers, and organic materials, all with the process of decomposition, rebirth, and recycling in mind. “Everything can potentially be buried, creating new humus, therefore, new life.” Of course, in theory, her wishes and ideology are powerful, but it is actually Silvia’s application that showcases her creativity and inspires many. 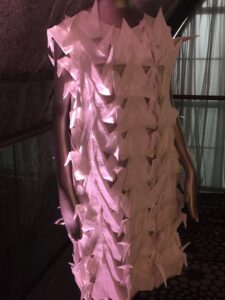 One of Silvia’s most famous creations is the Origami Peace Dress (featured in the Gallery of The Fabric of Cultures). The origami peace dress features 88 origami peace cranes crafted and folded using natural corn fabric. The dress not only exudes elegance, it also sends a strong message. Silvia showcases her dedication to sustainability by using only organic fabric in her tribute to the Hiroshima Memorial 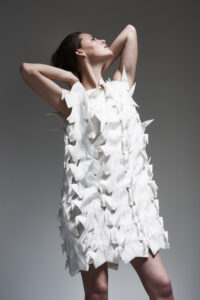 Park. This dress signifies the importance of peace, alluded to by its name, even empathy, in times of fear such as World War II. This creation also shows the inherent relationship between social and environmental justice in the 21st century. This garment has been included in two exhibitions, both part of The Fabric of Cultures Project, one at the Art Center at Queens
College (CUNY) in the Fall of 2017 and the other on the occasion of the end of the year Queens College Gala in Manhattan in the Spring of 2018. 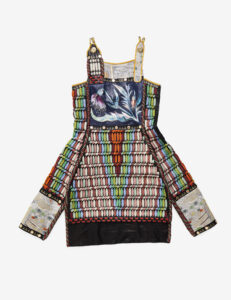 Silvia also designed a Samurai Dress (also featured in the Gallery). Similar to the Peace Dress, the Samurai Dress was influenced by her trip to Japan. It was in Kyoto that Silvia learned to create armor from two Japanese artisans. The dress is constructed from various multicolored segments of vegan leather. Its shape takes on what she was taught in Japan. All dyes and fabrics used on this dress were naturally sourced, thus continuing to showcase her dedication to sustainability.

This garment was featured at the Art Center at Queens 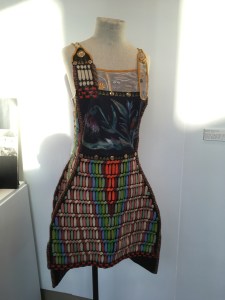 College as well, as one of the Fabric of Cultures’s goals is to bring more visibility to designers like Silvia Giovanardi.

It will take thousands of Silvias to change the world of Fashion. However, her work shows promise to many in paving the road for many other designers to follow. After all, it only takes one great mind to spark change.

You can find more information about Silvia Giovanardi and other designers like her in The Fabric of Cultures Catalog where both of these dresses are featured (pp. 20-27).

The Fabric of Cultures project will continue to explore Silvia Giovanardi’s work with a new short film, which is part of The New Made in Italy (link here to the YouTube channel) that will include her latest art works and performances when she was an artist in residence in the Fall of 2020 at the Cittadellarte founded by Michelangelo Pistoletto.

Here are some of her performances:

BENTO-RNATO – performance with Cittadellarte at Noto in Sicily, August 5th 2020.